js-dos v7 is mobile friendly. We build a set of controls that helps map touch gestures to key or mouse events.

The core concept of mobile support is a layer abstraction. Layer is a combination of virtual controls like buttons, joysticks and other that put on top of the game. Each control translates user interaction into some control sequences (keys, mouse) for the game.

You can put on top as many layers as you want. However, only one layer can be active at the same time.

Using game-studio can help to visually create this controls for game.

Take a look to our mobile tutorial:

Layer do the layouting of controls that it have. When you create a layer you should choose the layout system. Currently supported: square and honeycomb layout.

Key is a virtual button, that map touches into keyboard press and release events.

You must provide symbol and mapping key code for this control.

Keyboard is a virtual button that toggles virtual keyboard when you press it.

You can't customize Keyboard control yet.

Switch is a virtual button that switch between layers when you press it.

You must provide symbol and layer name to switch for this control. Using this control you can easily implements multi-layer virtual controls.

Often one layer is enough for a game, but sometimes the game has a complex UI that requires changing layers between scenes. In that case you can attach multiple layers to the game and then switch between them when needed.

X-Com one such game, take a look how it works (> is a switch control).

Screen Move is a virtual button that moves the mouse into one of the sides (up, down, left, right) or into one of the corners. Using this control you can support the scroll of the game screen in games that scroll when the mouse pointer is near the screen edge.

You should provide side to that control. Usually this control used in combination with Nipple Activator.

Nipple Activator is a joystick that activates neighboring controls when a joystick touches them. 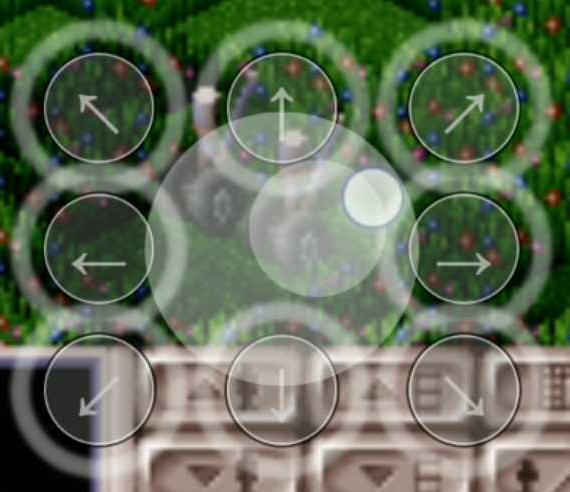 This can be used to implement scroll behaviour in games. Watch the video above to see how it works.

Pointer Button is a virtual button that changes the behaviour of click/tap. By default, click/tap is interpreted as left mouse button click. With this control you can change it to right button peramnently or temporary (while holding it).

Look the video above to see how it works (look on R virtual button).

You can't customize Options control yet.